How’s things? It’s been a while hasn’t it? Two lovely weeks away from the general routine! Top stuff indeed. The kids loved it and it was great to spend time altogether as a family and have some fun without having to watch the clock. Weekends and evenings go by so quickly.

I dunno about the rest of you out there in the blogosphere (tranesphere?), but I like to have a think about what I’m going to write about (Ed: it doesn’t show. That or you should try harder). Anyways, Monday / Tuesday, not a lot was going on. I mean, there’s only so much I can tell you about the week off and much as I share a lot with you folks, my family stuff remains on the QT.

So, I pondered what would I be writing about? Then lots of things happened in a short space of time.

Just before holiday a blogger friend J, he of Diary of the Man from Venus fame, dropped me an email saying that he was around Nottinghamshire and did we want to meet up for a spot of lunch? I must confess, my first thoughts where ‘which pub should we go to?’ but then I thought I did need to be sober for the rest of the work day… so that was off the cards. 🙂

So having made our arrangement via email, I parked up and met up with J at our top secret rendezvous (a local library). Never let it be said that we trans folk aren’t an educated bunch. 🙂 BTW, just in case you’re setting the scene up in your head, we were both in male mode. J looking very smart and me? Well, it was too hot for the old shirt and tie, so I looked a right old scruff bag, but hey, I save my best gear for Chameleons 🙂 After the hearty handshakes and big grins, we stopped by a shop to grab some sarnies. Wandering off we found a bench to sit and enjoy the sun and chat merrily for quite some time. J – if you’re reading this – I had a good laugh and certainly overdid my lunch hour. Still, never mind eh?

Having saved up a few pennies and as the sun was shining so gloriously, I decided on a spot of shopping earlier in the week. Nothing to do with having a 2 hour gap between meetings in town though eh? 🙂 I got a fab – well, I like them – pair of wide legged white trousers from New Look. I also got some killer heels – well wedges actually – at a bargain price of a tenner. I wasn’t sure about them, but hey, I could always bring them home. 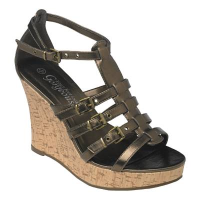 I still wasn’t sure about the wedges – clearly not the same league as Sam’s killer heels – but then quite a price difference 🙂 My, these bad boys where high: an inch platform and then… well, I don’t know about the heel height, my ruler wasn’t long enough 🙂 They’ll have to go back as while they look totally transtastic, door frames are now a problem 😀

Instead I managed to find some very cute gladiator sandals. Just a little wedge heel on them to stop them being dead flat and lots of buckles and the design du temp (if that phrase works) of the strip of jewelled /beaded leather up the foot to the ankle strap.

After meeting up with J, I was off to another meeting and then home to pick up the kids and sort out my Thursday night outfit. I borrowed Helen’s fabby red crinkle vest which a few people asked about on the night (Joe Browns if you’re interested and yes they do do a good size!). That was teamed with the gladiators and white trousers. With a bit of funky purple nail polish on my fingers and toes, I felt very summery. Sadly my camera batteries were flat when I tried to get a shot done. Oh well, the fun will just have to live on in my head. 🙂

As the weather had been so warm, I’d been half in the holiday mood and not really bothered to shave. Come Thursday night, face and chest were suitably defuzzed and it had been over a month since I’d worn any make-up. In some ways, it was a bit like coming to it anew. Okay, I’d like to think I know a little about what I’m doing these days, but still, the gap between now and last time was enough to make me pay attention to the slow change from male mode to trans. LOL. Maybe one day I’ll do a video! 🙂

We had a few new folk come along during the evening: Alison and her partner and another (t)lady and a friend too. I’d got the wrong end of the stick about party night and I’d run off a CD of 60s tunes: Brit stuff and Motown ready…. only to find that’s next month. Still, the music was given a test run while Tracy ransacked her stash of photos from yesteryear.

Come the end of the evening, I’d caught up with friends and had a really good time. Of course, the time went quickly and it was soon time to change back. All in all though, a very good week! I hope the week’s been kind to you.