Well, that’s Christmas pretty much over with! 🙂 A few of your poor souls have had to go to work, and for that, you have my sympathy. For those of us who haven’t (Ed: don’t rub salt in the wound!), there’s been a flurry of visitors and visits. There have been times when I’ve wondered if being back in the office may have been a little quieter, but it never got that bad. 🙂

With various visitors conversation has drifted across the news and what’s going on in the world. Oddly, there’s been two conversations about trans people, and no, other than the Ever Lovely Mrs J, they don’t know. Well, as much as my well-groomed eyebrows and earrings don’t out me, but if they do, no-one has said anything to me or Mrs J’s face.

It seems that outside of my little trans-friendly bubble, the middle classes haven’t quite made up their mind about us. On the one hand, there’s kids starting to come out with gender requirements, and from what I hear, their parents are doing what they can to support them. From a Chams perspective, I think we get around two to three emails a year from parents asking for help, and we do what we can/

On the other, there is, if you pardon an old phrase, Much Ado About Nothing, over the use of loos and changing rooms. Yeah, that old chestnut! There were some pretty contrived arguments at one point too.

For example, What if I say I’m a woman, but dress as a guy and keep my male name? Well, and I’m not a guru on this, I would say the key difference in that those wanting to be full time, or perhaps even a part-timer (like yours truly), will make the effort. They may well have a different name, will have taken some time to get the courage to go out, and, perhaps key, are not doing this for kicks or to cruise the opposite sex’s changing rooms. The idea that someone would state they are another gender, but then not do anything to move towards that – even forgoing stating they are trans-something-or-other – seems a bit unusual. It may well have happened as it’s a big ol’ world, but it seems unusual…. and I say that as a bloke who feels comfortable as either gender (at least when the moon is right 😉 ).

I should also point out that it’s only now, after about three days, that the penny has dropped, and that the part-timer could well be me. Duh 🙂 I mean, I’m Richard 99.9% of the time, I’m not changing my name, nor my gender – legally, socially, or medically – but I have used the ladies’ loos / changing rooms when dressing in Lynn mode. Interesting the Ever Lovely Mrs J did try and get a word in to ask if someone is presenting as a particular gender, why not treat them as such? But it seemed everyone wanted to talk, and not necessarily listen. Visitors eh? 🙂

Since Pandora’s excellent idea about a Happy Memory Jar a few years back, I think this will be my third year or so. If you’re not *ahem* ‘down with the concept’, it works like this. Find an old jar or big pot. Next, each time something good, fun, cool, etc, happens, you pop it down on a note, then post that in the jar. No peeking until the end of the year, and then you can go through them and see how many nice things have happened to you. I’m certainly looking forward to that at the end of this year.

But, perhaps understandably, I don’t put my trans stuff in there. Dad, what’s “A fab night out with the girls?” 🙂 So looking back, I can think of:

Talking of Chams, at a recent meeting, a new person turned up, and to save their blushes we’ll call them B. B was very much in a spin over who they were, and who they might become. By accident, B had turned up to the changing room upstairs and had somehow missed the main meeting downstairs. But, we got him sat down, listened to what he had to say, and tried our best to empathise over what they were going through. Skip on to the end of the evening, and B was mixing with the group, and from what I could tell they felt part of something.
To me, that is everything the group is about: being there for each other. We may all be walking a different path; have come from different places, times, backgrounds, etc; and where we end up, who can say? Hell, I still don’t know, but I’m enjoying the journey. 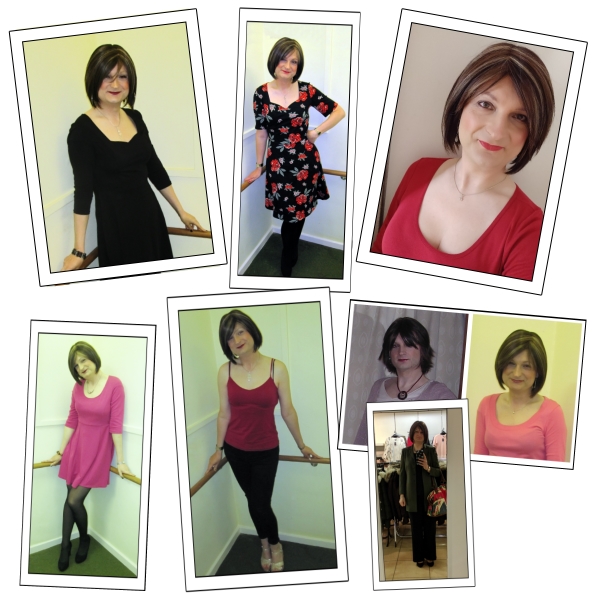 On my way home Green Day’s Boulevard of Broken Dreams played out, Billie Joe singing: “Where the city sleeps, And I’m the only one, and I walk alone…“.

Except, when I look to the past and the future, I’m not alone. There’s the Ever Lovely Mrs J, there’s Chameleon Group, and online friends too. To go back to an earlier post featuring Mr Hanks’ words around the difference between solitude and loneliness, many times I’m just me, pottering about, but I’m not without people who care. I’m not alone, and for me, that’s probably the best thing in the world, to belong.
I hope 2018 is kind to you.
Take care,
Lynn