Unlike last week’s Friday failure, I’m going to give myself a little more leeway by writing something up earlier in the day. If that’ll help improve the quality, well, it’s too early to tell 🙂 These last few days have been fairly quiet and as I’ve said before, that’s not necessarily a bad thing. I don’t mind reading or watching drama, but given the choice, I’d rather avoid the less than jolly type.

Oh, I suppose I should mention the Jubilee to keep this topical eh?

Right, that’s that done. What else? 😉 Oh yes, the pre-Jubilee School Trip I went on, the kids sent thank you letters to the parents who helped keep an eye on them. I got one from Wee Man which I loved. He’d re-worked a poem – does that make it a series of puns? – and I’ve put that in my memory box for keeps.

Trans-wise, it’s been next to nothing – apart from a few very minor emotional hiccups. I think matters may have been better if I hadn’t forgotten to take my anti-miserablist tablets twice in the week. Medication fail! 🙂 That can’t of helped. Plus, I guess I’m just ready for a trip out to reset my in brain gender balance. Why does it work like that? I’ve no idea. I don’t understand the requirement for a choccy bar, but I do know that once I’ve snaffled one, I feel better. Maybe I should just give up on the tablets and indulge in a choccy bar a day and a long walk in the park while suitably dressed. 🙂

Channel Four ran a program about class this week: All In The Best Possible Taste. It was hosted by Grayson Perry (artist and famous trans-person). This week’s episode was about working class and he’d gone up to Sunderland to spend time with the locals. It’s really not my world, a) it’s much further north, b) it’s working class, so that whole fly-on-the-wall / old school documentary piqued my interest. It’s all about people, their behaviour and image….. oh and the creation of a rather good tapestry at the end too. 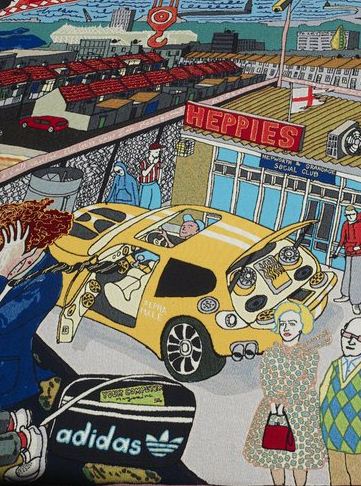 He said he’d found his own preconceptions challenged and to an extent, so where some of my own misconceptions. After seeing a segment on ornaments, I gave a wry smile as I looked at our bookcases, taking in the knick-knacks we’ve accumulated over the years. Photos, the occasional holiday trinket and some naive artwork and a metric sh**load of books. I wondered what people would make of those if they were shown on the box?

Anyhoo, at one point Grayson got dolled up with the girls and suitably made-up, headed into town. Big hair, short dress and killer heels: they were all part of the Big Night Out Outfit. One girl said that it was a way of dressing up and feeling different to how you looked / felt during the week. That struck a chord, even if how I (cross)dress in a different style. Maybe Jo Public and the Trans Massive aren’t as far apart as we think… or I think. If you…umm… feel? differently, you know where the comments box is! 🙂

Next week, the topic of discussion is the Middle Class…. which yours truly is very much part of. House in the sticks, married with 2.4 kids, pets, steady job and transport. We don’t do bad really. Oh, and the renovation work at Jones Towers is now complete. We have a fully working brand new kitchen-diner. Yay!