A week of highs and lows this time around. Funny, I suppose after my oh-so quiet post of last time. Maybe a case of be careful of what you wish for? 🙂

Tuesday, well, that was a bit of a black day if I’m honest. But don’t worry, it did improve! It wasn’t that anything went wrong or that anyone was hurt, that particular day. Instead, I guess I just slipped a little in the wrong direction. Maybe the chemical thrusters failed and I drifted towards the black hole far closer than I’d liked. I’m not talking about feeling a bit down, moreover the flat out lay on the bed – or in my case – sit in the car – just almost completely out of it. I guess that’s my recovery room – parking up in the middle of nowhere; just the sound of the wind and nothing else. It’s weird, I sit here typing this and it feels like another time completely. My mood is so much better now I’m at the end of the week. People eh? What a mess 😉

So why the upturn? Despite Tuesday’s blip, things started to get better Wednesday as I tried to do something about it – the depression, that is. Don’t worry, not in a scary way. 🙂 One of my worries about the idea of drug treatment for depression is this: what if this is just a sticking plaster? What if there’s an underlying issue which will still be here when I’ve stopped taking the happy pills? I really don’t want to go through all this and not be well at the end. My work offers a free counselling service, so after a bit of hand wringing of should I shouldn’t I?, I dropped them an email and got myself an appointment: Wednesday.

While I was waiting in the… um… waiting room, there was a book called Living with the Black Dog, or something like that. It was a picture book guide to helping look after someone who had depression. I flicked through it as I waited. So much of it was uncannily accurate that I found it very upsetting. I suppose I was probably that way out, but looking for a bright side in all of it, the cartoons shown made so much sense. Knowing that the tiredness and disinterest are just part of the condition and that they will go away one day helped. The other thing that jumped out at me was the idea of a White Dog Book. This was something were you keep a list of the good things that happen. Funny, I guess I’m doing that already with this blog. 🙂 In that, you write about all the good things in your life. It’s not a panacea, but I can see how reflecting on the good things in your life (health, family, friends, steady job and a fabby wardrobe) might help every now and again.

I got to the end of the book as my appointment was called. That lasted and hour and it was more an evaluation of how future appointments might go. The person I saw asked me questions about when the depression started (birth of my daughter), how I felt – even the really bad parts which I didn’t want to think back to. She asked what it felt like and I said it was like slipping down a table towards the edge. Whatever falling off the edge means in the real world, I don’t know. Truth is, I don’t want to get to the point where I’m that close and I don’t want to stare over into whatever void lurks at the end. I want to go the other way, back towards being my old self. We talked about my relationship with the Ever Lovely Mrs Jones (which is very good), my dressing up (how did I feel when out with the ‘girls’), school memories and early family life. As that panned out I mentioned my late sister, which happened in the noughties. I mentioned how that really threw the family and she asked me if I had any questions (which I won’t bore you with).

Throughout the session I kept finding myself trying to avoid prattling on and then apologising for doing so. She said that I was very harsh on myself – did I notice that? To be honest, I hadn’t. I guess I’ve always been critical and maybe I need to go easy on being so self-critical. Oh, her thoughts on the depression: possibly unresolved grief/mourning over my sister which is coming out as I look after my daughter, Little Miss. I was very close to my sister, W. I think we were quite alike in many ways and although it is nearly 10 years since her death, I still miss her. Just writing that, I can feel the prickle of tears and the cliched lump in my throat. I don’t say that as a pull for sympathy – it’s just a statement of fact. With those details in hand, I’ve got to sort some paperwork out for a regular appointment and we’ll see where that takes me.

Thursday saw another Chameleons meeting and it was a jolly good laugh. I got to catch up with friends, although there seemed to have been a double booking of the venue. Usually we have run of the place after 8pm as the Karate Kids kick out (Ed: no pun intended), but this time there were people in the kitchen and the front meeting room. Turned out they were from Avon and as I put the tables out, I heard one of the ladies take someone to the side and say “please don’t be alarmed if you see a few trans folk walking about…“.I would have liked to have heard the whole conversation, but tab hanging is rather rude and I was putting out the tables at the time (in bob mode I add).

Pat rolled up (yay!) despite her PMing me earlier saying a family do was in the offing, somehow it was on then off, then on and then finally off. After finishing the setting up, I headed upstairs to get changed – meeting Gayna, Alison and Maddy along the way. Outfit wise, the Fashion Fates had smiled and I was happy with what I’d packed. We had a bit of a minor comedy moment, as when most of us where half way changed,  there was a knock at the door. I said come in, thinking it was some of the unusual suspects, but it was a chap looking for the Avon meeting! Ooops! 🙂 “Downstairs, mate. First door on the right.” Funny, I suppose a more evil response would have been: “Take a seat and we’ll sort your make-up out in a mo.” >;-) But we’re not that cruel. Make-up? Oh, a tried the new Max Factor smokey eyes pen. It’s a light colour on one end and a darker one at the other. The pale shade blends nicely and I left mine rather subtle. At least, I hope so. 🙂 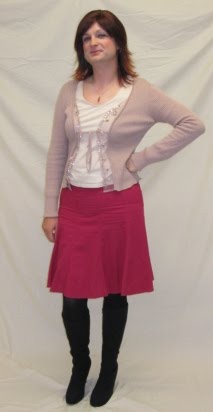 Outfit done and fully ready, I headed downstairs to find Jayne and Sam had come to visit. It had been a while since we’d met up, so it was great to find out what Sam had been up to. She also brought along some clothes for the group to go through… and yes, I did snaffle the boots for a small fee. The money went into the group’s kitty as every little bit helps the funds stay flush. The boots were very comfy – perhaps due to the platform – so they went into my bag and a small donation appeared in the group’s money pot. Sophie dropped in and we had a new visitor, who Gayna made feel welcome (well done that lady!). We had a couple of jokes about me being in charge, which I’d like to add I’m not 🙂 You won’t get me roped in that easily! 😀 That and Maddy’s Jamaican/ Ali G Postman Pat impression which has to be heard to be believed. Ever laugh so much your face hurt? It was just like that.

Maddy had brought along a memory stick as I’d promised her I’d bring in a laptop to swap photos. I had a few hi-res ones of her from the last six months. Funny, I can’t believe that she’s only been coming along for six months or so. Funny how you get close to people and expect them to be around. 🙂 Maybe that’s just me being a nutter tho 😉 Photos swapped I did have a look through some of my older ones. There was one of me looking very young – well, 10 years ago – and some scary ones where I’d not done too well with the right hair or outfit. Still, it’s a learning curve and I think it takes time to find your feet (Ed: try the end of your legs), or perhaps, more accurately, find your own style or look. I have on/off days, but on the whole I’m pretty happy with my wardrobe. Maybe it’s a mood thing.

As the Avon ladies where wandering off, I bumped into one of them and asked if they’d like to come and do some demos and bring some stock with them. They seemed up for it, but they didn’t half give me the hard sell over becoming a rep. That got a resounding no and then we had the cheek of: what about your wife? No, she works full time too, so thanks, but no thanks. We’ll see if anything comes of that, but I’m conscious that I still have Boots to contact. They did such a good time last time that I’d love to see them come back again.

After all that excitement, we had a rather lengthy photo shoot and Gayna had brought along a rather fancy camera. V professional. Lots of people lined up for shots, so my FlickR stream will be usually busy. Great to see everyone having a good time. A handbag full of win!

[ Today’s lyric: Not like the Movies by Katy Perry ]