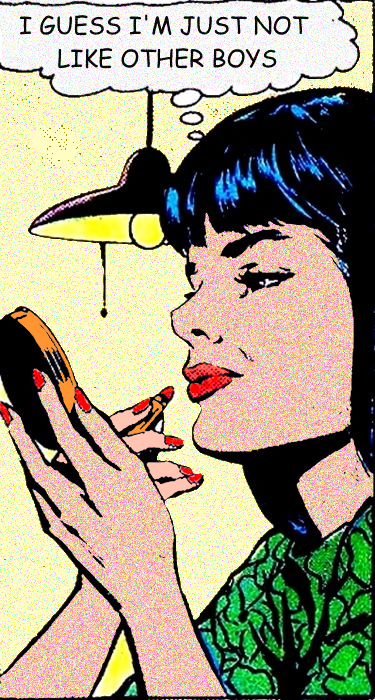 The other day I was browsing Reddit and I happened to hit on a re captioned 60s comic image, or as the cool kids are saying these days: a meme. 😉

The image to your right isn’t it, but one I’ve tweaked as it feels a bit more trans positive. The other was one of those dramatic head-in-your-hands poses… oh, and 50 underwear which I felt might tip us towards the racy side of things and that’s not where I’m headed with this.

Like a lot of things in life there’s a certain level of randomness – or synchronicity – about blogging. So it was that an article floated by about certain political parties trying to ‘protect children’ from transition regret.

Excuse me while I roll my eyes. 😛

I was a kid before I was trans.

I was a kid before I knew any words that fitted how I felt.

I was a kid before I saw anyone in the media who was like me.

The person who who took me down this path is me. Not the TV, not the liberal agenda, not my folks, not books, not comics, not drugs (!), and certainly not my school friends.

To be trans, or perhaps more accurately, to be anything but your assigned gender at birth in the 70s and the 80s was not a walk in the park. This doesn’t mean it’s time to get the violins out. 🙂

One more time for the folk at the back: you don’t choose to become trans. You realise it is part of you, and you have to come to terms with it: whatever that means for you. Maybe that’s someone who’s mixing their gender up, happily drifting between binaries, or is going full time. All those identities are valid.

If anyone reading this is thinking “well, you could try not to be.” Yeah? When did you realize you were straight? Have you tried not to be? I mean, it could be just a phase 😛 Plus, not being you? I wouldn’t recommend it and that old adage: that way madness lies, isn’t far from the truth.

What might things have been like as a kid who’d seen positive role models for part-timers like me? I honestly don’t know, because I can’t look back that far. Certainly not without the thirty plus years of experiences and help I’ve had along the way.

What I can say is that reading about people like me, people who can’t fit into a rigid boys only / girls only world, that helped. Listening to their stories helped me make sense of my own, and helped me find my way through things. Rather than bumping through a dark room hitting my shins on sharp corners, the far off light helped me navigate out of the shadows.

There’s a rule in comedy – apparently – that it’s bad to punch down. Challenge authority and mock the powerful, not the weak. If you’re hearing from a trans kid – one in the real world or in a news report – how about putting your own bias on hold and asking what is it I can do to help?

We trans folk, we’re not here to steal your kids away like some mythical piper. We were kids once and we know what it was like to struggle. I think I can safely say anyone who’s battled with dysphoria would not wish that on anyone. So, no, we’re not here to recruit: the next wave are already here and all we can do – cis and trans people alike – is help make their route through life better than ours was.

Leave a Reply to Life by Andrea Raven Cancel reply