Not so long ago I bumped into an old school friend. For sake of ease, I’ll call him X, but he doesn’t have a wheelchair or any psychic powers. Shame really, because the latter would no doubt have helped my exam results and solved the issue of having to work for a living. Mind you, all that spandex; it’s not very forgiving is it? 🙂 Oh, we’ve gone all improv and surreal again. What *is* in this tea? 🙂

So X and I were having a stroll through the leafy suburbs of Nottingham. It’s been well over 30 years since we last spoke, so there was much to catch up over. What had happened to who, marriage, kids, potted life history, etc. For me, all very fascinating and X certainly hasn’t lost his wry wit and comic timing. Much laughter was shared at how things have played out for two boys from the sticks, who are now older, broader, balder, not necessarily wiser, blokes in the city. 🙂

A few personal details were shared on X’s part. I’m not 100% sure. Maybe it’s my interest in his life, a willingness to share on his part, the coaching course or the recent YouTube video I watched “These are not the droids you are looking for” has really paid off. I won’t impart what was said because some things are indeed private. 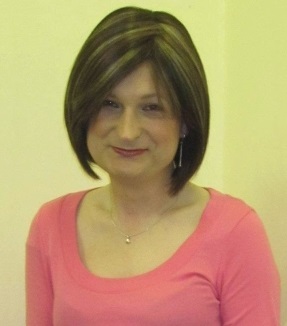 On that note, I – and I know now wrongly – assumed he knew about me being trans. X was in the wide social circle back when I was outed. Given the years gone by and that I’m now far more at ease with things, I thought I’d broach the subject. I opened my smartphone and showed him a snap (see right). “Do you know who this is?“

He looked for a bit, stared into the distance, and then looked to me. “Sorry, not a clue. Should I?“

X nodded, pulled a thoughtful face and said something along the lines that he had no idea. Not only of who was in the photo but that that was part of who I was. We had a chat about trans things, Chameleons, how things have changed for trans people, and he confessed he knew very little. We spoke a little about it and the conversation moved on to kids, how culture has changed, and had life played out as we had expected. X said he’d keep things under his hat, which is cool by me, but if he does say more, we move in very separate worlds these days.

In honesty: I had no idea how things would play out – as I said to Val the other day – but I’m very glad things have gone the way they have. I’ve a loving family, health is okay, I get out now & again, so these are all things to be grateful for.

So, is there – to use a modern term – a take away from all of this? If there is, perhaps we’re not quite so recognisable as we think we are. Sure, the voice can often be a dead giveaway, but photos and at a distance, why we might not ‘pass’, we do pass as someone else. Maybe, when you’re out and about, that’s something to keep in mind. Maybe you can worry less and enjoy the moment more. You might, fingers crossed, find happy memories.