It’s been a bit of an iffy week if I’m being honest. A right old riot of negative emotions chucked into the tumble dryer and given a long spin. At least, that’s how it felt. I should stress – and we may come back to that word -that it wasn’t anything serious. It was, what I like to call, some Work Toss. Things that really don’t matter in the big picture, but that somehow get under your skin.

I guess, and maybe like a lot of folk, I don’t like doing things I’m clueless about. Yes, I’ll try leaving my comfort zone, but heading into something I just don’t get (like maths or the offside rule) really isn’t my bag. Plus I may be working with a colleague who can best be described as an utter tool… and that’s his good points. He is to manners and modesty what bigots are to inclusivity 😉 So yeah, not exactly brimming with excitement for this project. Add in a dash of matrix management and egos – and I don’t mean mine – and, yeah, a wiser person would retreat to a safe distance and enjoy the fireworks. That, however, is not an option for me. Oh well! 😀

Thing was, all the stress signs were kicking off. Distracting myself with other work, nerves, feeling panicked, withdrawing from colleagues, and being a bit grumpy at home. I felt tired even though I was sleeping enough, and in the morning, well, I was not good company. That’s just not right, IMHO. The Ever Lovely Mrs J, Wee Man, and Little Miss all deserve better, so I did try to keep my cool. Thing was, I had wrongly assigned this to trans stuff because it can manifest like that too. As Diane said at Chameleons last night, it’s easy to blame being trans when things aren’t right upstairs.  But, I shall put on my big girl pants (figuratively speaking), paint on a smile, and give it go.

So, ignoring the negative, what’s been good about this week? As things cooled off a little in the for Thursday, I was in a better mood. I also managed to finally find on some white leggings in tall! Result! It’s only been a two year search 🙂 Plus, the Ever Lovely Mrs J let me borrow a summer tunic and fielded the nippers so I had an early pass out. Chuck all that in with some time between travelling to appointments, and I had chance to paint my toes. All things considered, I felt rather blessed.

Chams went well with a number of new folk popping in and a return of some recent visitors. Good to know they’re coming back. Due to that early doors pass from the Ever Lovely Mrs J, I was early arriving and I got ready pretty quickly too. I had packed way too many shoes though! A pair of heeled sandals, two sets of flats, and two sets of wedges. Yeah, I wasn’t sure about the weather, so I’d hedged my bets!

But, a quick try on was done and the wedges had it. I was downstairs in record time (for me), hence the clock photo. Oh, there was also a sign for a weight loss group and the line about there are no strangers made me chuckle. Yeah, we’re pretty strange for some 😉 The bit about friends though, that’s more like it. With the evening sun being out, Val and I nipped out for a quick photo outside. I know, no stairs, right? Shocker! 🙂

I had a long chat with an older chap about his life through the 60s. I guess it shows how far we’ve come compared to those dark days of secrecy for survival. His carer had accompanied him, so she asked some fascinating questions about what it was to be trans. As someone who’s not trans, hearing her take on the situation was very interesting. 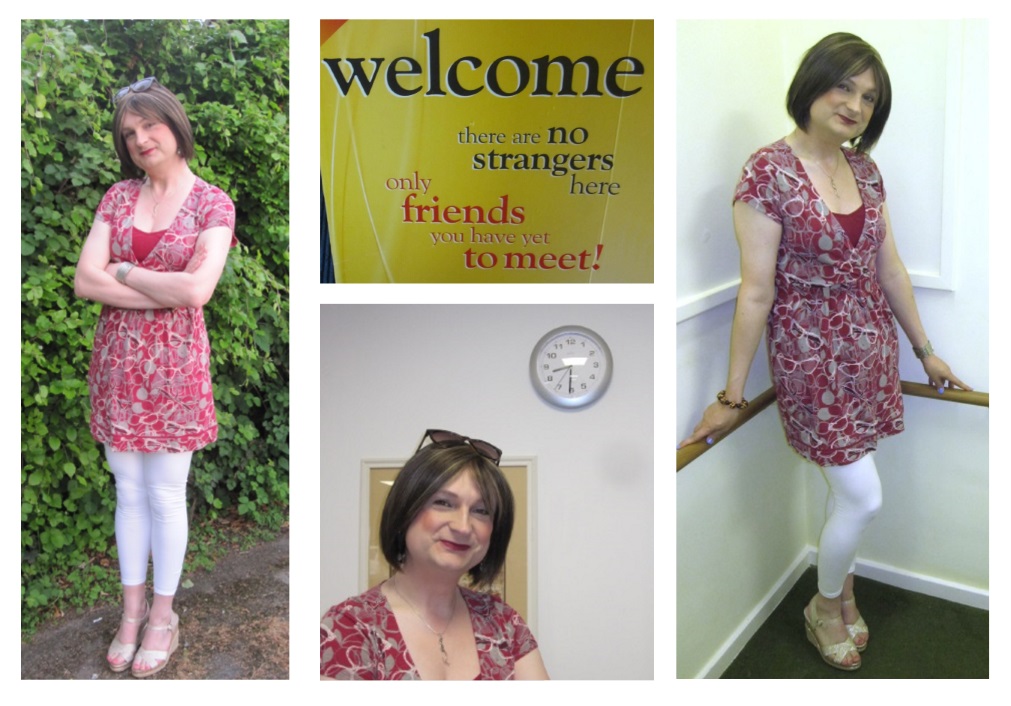 So, remember I mentioned stress earlier on? I had the good fortune to attend a lecture on that subject. When I can go through my notes I may use some of the ideas as posts later on. But, today’s takeaway -to use a modern term – would be to make a note of three things that have gone well for you each day.

By either dumb luck or serendipity, I guess blogging helps me think around that. Sure, sometimes things don’t always go brilliantly, and I write about what’s bugging me. Thing is, by looking back at photos, or thinking about what we talked and laughed about, it’s not hard to find twinkles of gold amidst the muck and mire.

Just looking above there’s my family, laughter at home, a walk through sunlit trees at work, pretty nails, feeling good in a summer outfit, and sharing honest conversation with friends. Oh, and I’m off for a week too. Here’s to a week of taking it easy.