I’ve deliberated about posting this today, but I think I’m just going to have to dive in, and give it a spin. Without any fanfare or fuss, the Ever Lovely Mrs J and I had a bit of an argument last night. Now, I’m not going to go into the who’s right and who’s wrong. Firstly, as I’m writing this, it’s going to be biased. Secondly, it would be somewhat tedious…. Possibly more so than a regular post 🙂 But hey, moving on.

So, yes, I made a mess of things before I went out, and yes, I did upset the Ever Lovely Mrs J. Yes, I did feel bloody awful about it, and yes, I did apologise profusely. Not because it’s the British thing to do, but because I was wrong. Maybe if I’d listened or asked before popping upstairs for a shave, things wouldn’t have headed south. But, hey, 20/20 hindsight eh? It’s a wonderful thing.

Now, I don’t like quarrelling with Mrs J because it points out something’s gone wrong. Usually, by me I should add, but let’s not go too far into my blunders and transgressions (hint: that’s not a trans word 🙂 ). But, they, arguments, are, as we said to the children, necessary. If you don’t clear the air when needs be, well, then things can either build up or drive a person to seething resentment. The classic joke that we see in ourselves: ‘No, it’s fine. Really.” Obviously, it’s about as far from Fine as someone on a rocket headed out as they’re late for their tea. 🙂

There’s a phrase I’ve used on YATGB a few times: It’s all fine, until it isn’t. It seems that life has pointed out that this isn’t just true of being trans, it’s also true for our partners, and/or family.

So, without a blow by blow he said/she said script, the crux of it is this. I get caught up in my Leave Early routine on two days of the month: second and fourth Thursday. I do want to be out by 630 so I can swing by a collect Wee Man from his weekly visit to a mate’s house. I’m usually dropping Wee Man by 645 to 7 subject to traffic.

I appreciate I’m probably talking to a trans audience, so you may already get the requirement to be out. Not a case of popping to the pub, visiting a mate, or off to some hobby. No, it’s out, so I can be dressed. This is the catch: for two days a month, there are rare times when the Ever Lovely Mrs J turns down a social invitation because it clashes with one of my Thursday nights out. I get that that can be annoying.

Then, looking at it from the other side; there are only two nights out to Chameleons a month. Two times in which I can be all of me. There are times when it’s not enough, but I bottle it up, and engage in some coping mechanism (YouTube make-over videos, gaming, baking, etc) until there’s time when I can. I know that when I miss a meeting, it upsets me and I get cranky. I try to not let it get to me when we’re on holiday, because holidays are fun right? But switching off the trans-ness? Well, there isn’t an off button, and I’ve yet to find a blue pill that hauls me up and out of the rabbit hole. 🙂

So, what’s to do? Not much but put it behind me and not mess things up. I think I am over the guilt of being what I am, but I don’t dismiss the guilt I have over sometimes having to put myself first. Yes, I know I’ve written about ‘put your own oxygen mask on first’, but that doesn’t make it any easier. Perhaps I’d do well to listen to the advice I sometimes give others when asked, but clearly, I ain’t that clever. 🙂

Chams itself was reasonably busy, and we had some great discussions about labels or the differences Jacob has spotted in changing into a man. Yeah, sexism is alive and well, just in case you’ve not seen any of the headlines for the last ten years. 🙂 I did talk about how the argument had made me feel bad, and some of the others were kind enough to share their experiences. That helped. Not from a vindication point of view, but more to know that it’s something others have experienced and that sometimes, the juggling act between family life / trans expression is really tough on both parties.

Ann, one of our new members asked why the group wasn’t better advertised. We – Val, Diane, Jacob, me, and Diane, all chipped into this. The quick answer is that it’s tricky. Tricky in that while we want trans folk to know about Chameleons, we don’t want any trouble from yobs or protestors. For that reason, Chameleons is in the self-help guides, registered with a few charities, support organisations, or what-have-you. We’ve had two invitations to talk about our good work (their words, not mine) from the local paper and radio station. But… each time we’ve kindly refused. It’s down to risk and privacy. The risk from dodgy folk turning up (no, the wrong type of dodgy, not us trans types 🙂 ). That or the danger of being too high profile and members being accidentally outed. So yeah, we’re a relatively well-kept secret.

Ann asked how can we expect to become more accepted if we stay hidden. A fair question, and again, there’s that double-edged sword. On the one hand, by staying hidden, we don’t risk being outed, or trouble (verbal, social, violence, etc), but by being hidden, we don’t exactly advance the cause – if you can call it that – in helping (non-trans) people understand that we’re not weird. Well, okay, a bit weird, but the right type of weird. Maybe if we were minted we could be classed as eccentric. But, for a lot of us, it’s not just us who’s deciding. If we decide to be out, we’re out and our family and friends are drawn into it. Like I said, it’s tricky. 🙂

Ah, deep sigh and let it go. 🙂 From a positive point of view, T-Central were kind enough to feature another post of mine (thanks Calie!). That put a spring in my step.

Thinking about Chams, I was happy with my outfit choice, and doubly so with my eye make-up too. I tried using an eyeshadow kit I’d not used for a while, so it was a look I’d not seen for a while. Perhaps it’s better to mix things up a little more?

I also tried some pre-glued nails, and they were both easy on/easy off. Certainly a lot less of a faff on keeping my own nails long (I broke one picking up the shopping), and there was no tell-tale residue that needed to be cleaned off. Maybe it’s time to invest 🙂 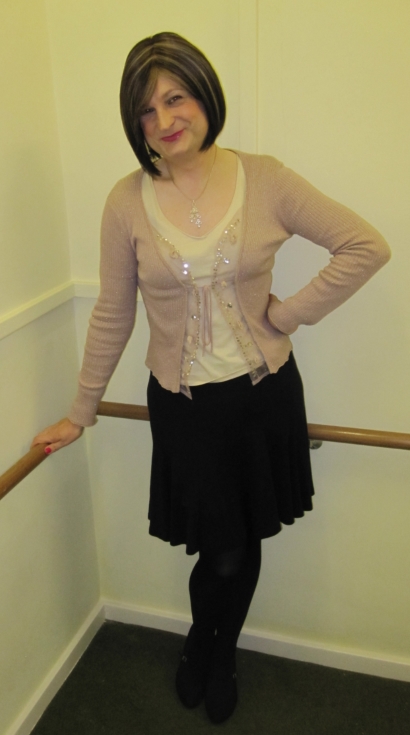 At the end of the night, there was time for a few snaps to capture the moment. The trans-guys asked again about sorting out photos for the group, so that’s something on my do list for later in the year. Talking about the year, I’ve now sorted out next year’s meeting dates, so the action log shrinks a bit each time.

As I got changed and said to Val, “I just feel so comfortable like this.”. I’ve worn this outfit out & about, and it just feels, well, very me, I guess. Maybe it’s those moments where it is okay, and you feel alright about yourself that make it worthwhile.

It may be tough every now and again, but I can’t think of any other way I’d rather be.