The white space that’s the Blogger interface has been open a good twenty minutes, and yet, other than right now, I’ve yet to put anything in. Not that I’ve writers block or anything, I’m either easily distracted, or a terrible procrastinator. (Ed: The Procrastinator. He’ll be back… possibly… or not. Maybe). This week has been a little full on for my liking. Not that there’s been much drama (thankfully!), just it was all rather hasty.

When in doubt, just ask

Tuesday, I stopped off at an out of town shopping park to see if they had the shoes I wanted. They did, but they’d moved the shoes into the middle of the shop. Eeek! Well, I know that you can’t take the shoes into the changing rooms either. Who thought of that? The Trans Mafia must have been napping that day, to allow that through.

Nothing comes between a t-girl and her shoes, so armed with a pair of jeans and a smile, I headed to the changing rooms. “I’m sorry, you have to leave those behind,” the assistant said as I strolled up.

She laughed and answered: “I’m sure you would.”

“Umm… Actually, I’m not joking. I would like to try them before I buy.”

Cue a small pause, while she thought about it, and then. “Go on then. You do, what…mm… you need to do.”

That was that. They didn’t fit (drat and double drat!), which is odd because I’ve got some size eight heels from the same place and they’re a little too big. These were wide fit too. Shoe retailers, sort your sizing out! Anyhoo, as I was taking them off, I overheard the sales lady saying to a colleague that it was her first day. Ah well, in at the deep end, eh chuck? 🙂 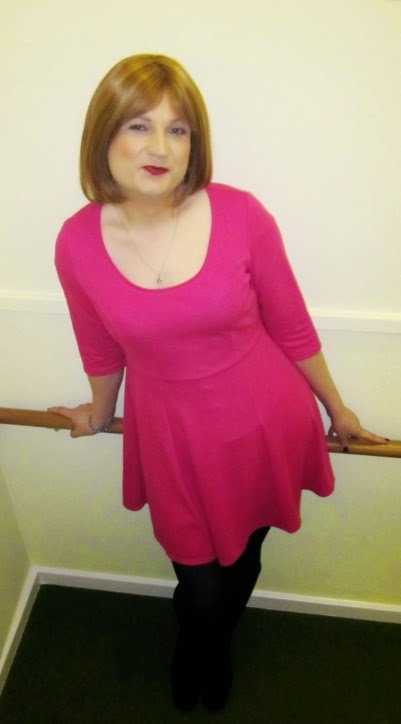 The half-term break (see Previously on YATGB… 🙂 ) was a welcome time away, and this meant it felt like I was having hardly any gap between nights out with the girls. Bonus! I had been working from home in the afternoon, so I had repacked from a previous thought. Sadly, my love of food has been my undoing and when I came to try the skirts on that I’d packed, none of them did anything for me. The monochrome miniskirt – I know, I’m 40, should I wear this? – would not do up, and the red flared panel skirt sat far to high on my hips. Bugger…. :- I really am going to have to work out an exercise / diet plan that I can stick to. Luckily, I had packed an emergency skater dress (thanks for the photo Val!), which I was pretty sure be’d okay.

Despite the wardrobe issues, I did seem to have more success on the make-up front. Earlier in the week, when I was shopping in Boots, the sales lady had on the most fab matt lipstick. If this is the right thing to do or not, I said I thought it looked fab on her and was it part of the shop’s range. Rimmel 107 apparently, so I bought that the next day. I thought it was a bold colour and you need of a good lip pencil to keep it in check. I was very pleased with how it stayed put and the finish.

The last three attempt I’ve had at applying false eyelashes have not gone well. This time, I was determined to get the hang of them, so after a few checks on Pinterest, I found a guide that old Ham Hands here could follow. Sticking with that – if you pardon the pun – seemed to do the trick.

I’m sort of on the look out for a new wig, although I’m going to have to save the pennies up first. I like the colour of my brown one, but I prefer the cut of my ginger one. Oh, fickle thy name is – actually, I’m not going to complete that joke. You work out the rest 😉

Last week, Sue blogged about the question of many of us are trans-something-or-other. If you’ve not read the post, I’d say it’s worth doing so. Lark, almost high praise eh? 🙂 Now, usually I reply if I find a post really interesting, but this time I didn’t. The question sparked off a few thoughts in my head. Namely: What if there was a scientific test? An evidence based system, to see how ‘trans’ you might be in later life?

I’m no psychologist, or medical expert, but to me, being trans; it’s not something you sign up for: you just are. You’re dealt a set of cards at birth and, while you have a choice on how you act on your feelings, I don’t believe you can switch the necessity off. I’ve said necessity, because I think the words desire, or want, have a loaded meaning to them. Not that there is anything wrong with desire, although I feel it’s not the right word for this. For me, if I have to only be Richard, I find life hard. I won’t say I feel trapped, but I do feel stuck, or restricted and that’s not some place I’d like to be.

So, imagine in you will, your good self in childhood, and you’re around nine or ten. There’s a new test you can do that’s painless and it will predict (is anything certain other than death, taxes and data loss?), where you might fit on the gender spectrum.

For me, looking back, I think it would be easy to think I’d like to have taken it. It would have to have been anonymous, because the idea back then, of someone finding out, terrified me. Ironic, given that Hell isn’t other people: it’s the lack of the right people and being alone. IMHO 😉 Maybe in later years, I would have liked to have some evidence – if this would work like that – for the peace of mind, to tell myself, or ever the Ever Lovely Mrs J, that I’ll always be a bloke. Okay, occasionally fancy, but still male.

I suppose, like all technologies, there’s a dark side to that too. What if testing became *ahem* encouraged, so health services and parents could know what might happen. Would that necessarily be a bad thing, or is being trans something that’s your secret, and that you share when you’re ready to, if ever?