It’s been a bit of an extended holiday for the Ever Lovely Mrs Jones and I. Last week, the Jones Massive were off Up North, to take in the wilds around Hadrian’s Wall and stroll about other fantastic ruins. We also found a number of summer activities put on by English Heritage. If you do have kids, these free events are brilliant. Hands on stuff such as digging for artifacts in a sand pit, Roman Soldier drill, or dressing up as fierce Vikings. Hopefully, the stuff holiday memories are made of.

The extension has come is because Wee Man and Little Miss have been at my Mum and Dad’s all week. I guess it’s part of the modern life, that with both parents working, juggling the childcare with summer clubs, holidays and time off, eventually, you have to ask (very) nicely if your folks will help out. Which they do and the kids have a grand time and being away from home, it gets them away from the TV, Xbox and tablet(s).

So the Ever Lovely Mrs J and I have had some long walks in the park, with the hound (natch); a posh tea out and lots of lazing around. It’s been a nice change and both of us are missing the nippers. Luckily we’re picking them up this Saturday, so it’ll be hugs all round and then it’s off to a party at a friend’s house. 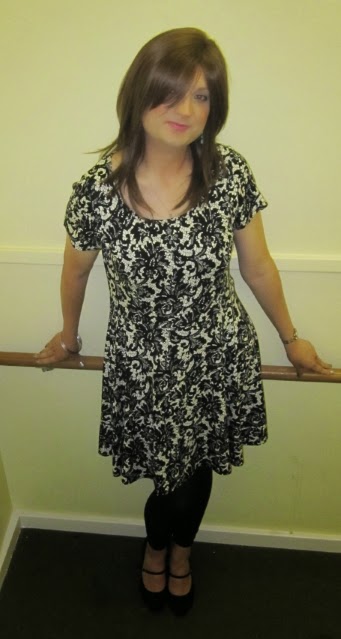 With the kids being away, I had the good fortune to be able to get ready at home. Mrs J was cool about this and if I’m honest, this little luxury, really put a spring in my step for the week. It may sound a little silly, but being able to get ready at home – not that there’s anything wrong with the facilities at Chameleons – it was a very welcome change and I enjoyed the ride there and back.

I had been flicking through the wardrobe and I found a dress I’d not worn in a while. I team that with footless tights, my new heels and some fancy earrings (not clip ons – again, something else to be thankful for). I had a good night out, plenty of chat and we had a research student pop in to hand out some questionnaires. These were about transphobic hate crime as she’s part of a team looking into it’s prevalence. Possibly, because a percentage of it goes unreported. [ NB: as happened to one of the Chameleon’s members this week 🙁 ]

There was also an email to the group’s inbox from a local radio station. They were asking if any of us would like to go on their morning programme and talk about Kellie Maloney, a former boxing promoter, who has come out about being trans. NB: you may also find this an interesting read from the BBC News site. I gracefully declined, because while offering to help with a spot of research, the group values its privacy and voices are somewhat of a give-away!

By now, you’ve no doubt heard that the incredible talented Robin Williams ended his life this earlier week. I found this quite a shock, I suppose because you just expect him to keep on being in the background. I wouldn’t say I was a big fan – in that I’ve seen all of his works, etc – but his comedy and improv abilities amazed and amused me in equal amounts. I didn’t read how he took his own life and in all honesty, I don’t want to. I would like to remember him for his brilliant wit and while he may have lost the battle to depression, he gave it a damned good fight.

If there’s anything good to come of this, I’ve noticed a lot of positive stories about depression. Many people have talked it and encouraged people who may be feeling this low, that taking your life isn’t the answer. It isn’t. If may feel like it – and there have been split second moments in darker times, when That Thought creeps into your mind and whispers It will make it all stop. No one will mind….. Which isn’t true. People will mind. People will miss you and the world will be less well off if you go. I didn’t really get this until I came out of the other side and I can look back at those dark woods far over the hill. I did walk through them and many times, I fell down. Friends and family helped me back up and slowly but surely, I walked into patches of light and then back into the real world. The world where you can smile again and feel.

On another note, I was talking to a colleague at work and he mentioned that he was glad that I’d come out at work – for a moment I thought, sh**! The trans thing?– about having been depressed (phew!). He went on to say that he’d been through it [depression] twice (the poor bugger) and having someone at work stand up and say that they’d had it too, made him feel better about himself. We had a long chat about things and I thanked him for his kind words. When I did come out about it, it was partly for selfish reasons: I wanted to publicly apologise for anyone I’d been rude to. Depression can make you say the nastiest of things sometimes. I guess it manifests itself differently for everyone.

Calie – of T-Central fame – dropped me an email the other day. Apparently, the T-Central team are working on a new feature for the site and she’s asked if I’d do a short piece for them. I guess I better stop playing Minecraft and put my thinking head on!