How’s things? It’s been the first week back at school for Wee Man and Little Miss. They took it pretty well and despite a little bit of grumbling from one of them, I think they both enjoyed catching up with their friends. As is the case with a new year, they both get a new teacher. Wee Man is now in the last class before he goes to secondary. Little Miss, is in her second year and I remember her teacher being a big hit with her brother. Said teacher, he’s…. what’s the best way to say this? He’s got that knack in getting kids really involved and keen to learn. Dare I say, it’s a joy to watch and I hope he continues to do well.

What else has been going on? Well, I’m officially over 70 days since I was last fabulous. But, hey! Who’s counting!! 🙂 Ah, it’s been a bit strange really, but what’s new. I’m trans; strange seems par for the course. 🙂 Where was I? Oh yes. Strange. Yeah, there’s been family birthdays, holidays, the weather was just too hot in July and this month, the Ever Lovely Mrs J will be away on a course. That leaves El Muggins here at Chez Jones. Not that I mind, I don’t do too badly considering and bless her, Mrs J said she hadn’t realised I’d miss another one and I said it was fine. Despite feeling that I’ve missed my friends at Chams, I’m doing okay. She suggested that I go out to one of the Invasions instead. Maybe I’ll take her up on that offer. It has been a while. 🙂 Odd really. Back in the dark past of the Shadow of the Black Dog – hmm, which sounds like a dodgy pub or even dodgier pirate movie – the idea of going that long without dressing up, would probably have sent me into a tailspin of fear and panic. 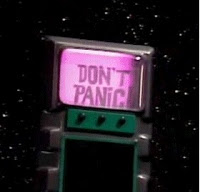 Perhaps I’ve somehow got the hang on the CBT / Hitch-hiker’s mantra of Don’t Panic. Actually, if any one is thinking of paying for CBT, save yourself a large bag of cash and instead, take to heart the above Hitch-hiker’s Guide to the Galaxy reference and Monty Python’s Always Look on the Bright-side of Life. Give or take some expert advice and psycho-babble, neither comedy piece is too far off the mark. 🙂 But cheap shots aside, maybe long term, the advice / training has worked. If I find myself chewing over an event that I can’t affect, I try to take a step back and ask myself: “Do you feel lucky, punk?” 🙂 No, sorry, the other questions:

Subject to the outcome of those, I tend to find; not so much giving up on things, but more, not getting so wound up about things. Take for example work: there have been times when I’ve fought – from a political point of view – to Get Stuff Done because I’ve really believed that it would make a difference. Yet now, if the Powers That Be aren’t interested or just don’t want to follow my concerns, I try to let it go. A friend once said to me, save your breath for the “Well, I did say..” moment – just don’t be an arse about it. 🙂

Then from that, there’s shopping. Which really, sounds incredibly shallow, but a) I don’t give a hoot, and b) finding the right item, can help you. Sometimes, looking good on the outside, can help the inside feel okay too. I did have the good fortune to find a couple of dresses I liked the look of at Dorothy Perkins. Not only where they reduced, but there was also an extra 25% off that week. Armed with my meagre savings, a voucher and copies of the items I was interested, off I popped. 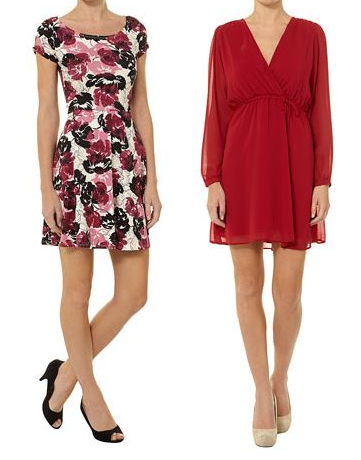 Both dresses are shown to the left and on the web site, they looked very nice. In the flesh, so to speak, they felt okay quality-wise. But once I got to the changing room and got them on, they didn’t quite work.

I’ve said it before, but I’m so tired of this current trend of a high neck and short cap sleeves. It seems to have run for a full year and personally, I feel that cut does nothing for me. I don’t know if it was the lack of boobs, but the neckline would wrinkle up and much as I loved the pattern, it just wasn’t me. So, back on the hanger for that one.

The floaty red number felt good, but it was either the lack of my artificial curves, or that it made me feel a bit…. well, square. Chuck in the fact that it’s close in appearance to a friend’s dress (who rocks it, BTW), that too, went back on the hanger.

Still, the good news from this little shopping fail, was that on the way out, I spotted a dress – not my size! – which looked a bit like the Desiguel ones. Now, I love their clothes and once I’d got home and done a bit of web research, I had a quick chat with the Ever Lovely Mrs J and I’ve ordered two from the site. Throw in an eight quid voucher from Google, and that’s two dresses for forty quid. No faffing about parking, no need to pack *ahem* ‘curves’ etc. I’m hoping they arrive next week, as I’m working from home and it would be remiss of me not to do a little office work suitably attired. Fingers crossed eh?