So much to blog and yet so little planning. Let’s start at the beginning, shall we?

Yup, I’ve hit that midway milestone that is 40 years. I was…. back in my late 30s, strangely concerned by this number. Which is, now I’m older, wiser (!) and in a different age bracket, unsure of what all the fuss was about. I still feel like I did in my 20s, although I’m a bit more sure of myself and there are a fair few more miles on the clock. Other than that, all is well. The odd thing is, when do I start planning for my mid-life crisis? I’ve done the motorbike, tattoo, long hair, earring and dodgy outfits… what does that leave? 🙂

A week to remember

As part of my dual score years upon this rock, the Ever Lovely Mrs Jones said that she’s planned a trip for just the two of us. With the kids being back at school, the Ever Helpful Mother-in-Law offered to both house sit and look after Wee Man & Little Miss. So, sans nippers, Mrs J, hound and I headed off to the wilds for a quiet few days.

The cottage was right out on the moors – luckily I’d left my American Werewolf DVD at home – and we had a fab time. There was plenty of walking, chatting, consuming cake, playing with the hound on the sand and, of course, reading books with no interruptions. Talking of the latter, there was no mobile signal or WiFi, so it was a proper old school holiday.

During the holiday, Mrs J said somewhat sheepishly that she hadn’t bought me anything. A little part of me – the shallow materialist – let a little moue of regret, but – as the lyric goes, not what you call real sorrow. 😉 What she had bought me – other than the holiday itself – was memories. A few days of quiet enjoyment of each others company, fine food, wonder scenery, good conversation and well, just time well spent together.

We also had a couple of positive chats about the trans stuff; like how I was feeling and why was it that a number of Chams folk seemed to be heading towards transition. As we talked, we headed towards the idea that maybe the trans folk who come out to groups are more…. here I’m struggling for the right phrase…. ‘out there’ than more in the closet types and as such, we’re more go getting in terms of what we want. Mrs J said that one of her worries is that secretly I wanted to go a similar way and that I was holding back for some reason.

In all honesty, I said that I wasn’t. For the majority of the time, I’m happy being a bloke. Yes, there are times when things don’t go well (that’s life folks!), and there are times when life truly sucks (yeah, Black Dog and Pink Fog, I’m looking at you ne’er-do-wells). But, in the main, life is good. I guess the only difference between me and the next guy, is that every once in a while, I like to dress up trans-stylee and head out to enjoy myself. I suppose one of the issues with negative feelings is that sometimes, the urge to dress up is very strong and when I don’t have the time for it, so the Pink Fog starts to bite.

Talking of going out…. 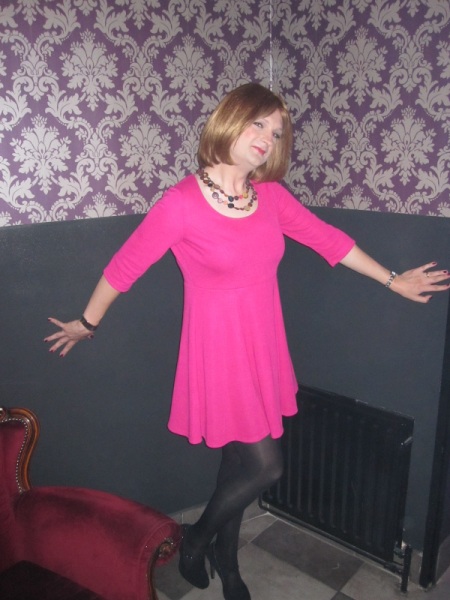 With it being a birthday week, I was in two minds about asking to head out so soon after Chams. Do you find yourself wanting something, yet not wanting to talk about it, in case it spoils a good time? Yeah, I was there too, but my fears were unfounded. After a day back at work, I packed a bag and headed off to meet up with Maddy and the rest of the Invaders. Sadly, Sophie was engaged elsewhere, but it was short notice. Sorry, Mrs!

It’s been a while since I’ve been out and about, and with the bless of a late pass out, I wasn’t too worried about getting changed really early. Pink party dress and heels on, I parked up and headed into the Foresters to meet with the others. I bumped into Jenny and caught up. We’d worked together for many years before I stitched jobs and we never knew each others secret. It still makes me smile thinking back. Wasted years eh, Jen? 🙂

I was getting a little tired towards the middle of the evening, but a spot of dancing at the club helped shift the cobwebs. I would have liked a few more pop tunes than the heavy dance they were playing, but you can’t have it all can you! There was, of course, chance for a brief photo op (thanks Maddy). I did try a few comedy poses at the dancing pole, but I think the light conditions weren’t right. We tried our luck in the bar area instead and then I was off back home to get some shut eye.


Despite a late night – or was it an early morning? – on Saturday, the Jones Massive were up and out to visit my folks. As we’d been away, Mum had wanted us to have a birthday lunch. Just a small buffet, she promised. Originally, she’d asked if I’d like a big do down in the village hall, but that’s not really me, so we settled on a family affair.

We arrived an a friend of my mum’s was visiting, so it was nice to catch up with her. Then my sister and her hubby-to-be turned up, then another family friend and then a good mate of mine turned up. I’ve not see R for some time as he lives down south, so that was a really nice surprise. Mrs J said my face was a picture, but luckily, there was no camera. After that, a few more folk turned up, including an old mate + wifey-to-be from Uni came too, so we had a good long chat and a laugh. In many ways, it was as if we’d never been apart and for me, that made the day really special. Somehow Mrs J and my mum had planned all this and kept it under wraps, the cheeky secret squirrels.

After visiting mum’s we were off to another party near home to celebrate their engagement. There was drinking and dancing. This time around, we had some indie tunes and Little Miss joined in too. I think she’s getting into the swing of keeping with the beat. Really, with Mrs J and I as genetic source material, she’ll be dancing it up with the best of them in a few years.

That’s my whirlwind week over. Another year in the can and some very good memories to boot. All I have to do now is cash a few birthday cheques and ponder what fashions to buy 😉

Take care and thanks for reading,
Lynn
x