Today’s post is a bit of a tough one to write. Not that I’ve run out of stuff & nonsense to chat about, but…. ah, you’ll see in a mo. I had thought about talking about careers, jobs and progress, but I guess I’ll save that for another day. It seems that…. and how I hate to say it, I’m in danger of slipping back into sharing company with the Black Dog. It is not, all encompassing, but it is there. 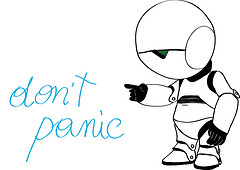 Y’see, I do and don’t want to talk about it. The don’t comes into it as I don’t want to allow myself to be defined by this, nor do I want to feel as I do. Additionally, I am conscious that this emptying-of-my-head post will seem like another woe-is-me stream of consciousness, which to be honest, doesn’t hold a lot of interest for me as a blogger. :- Yes, I feel a little off it, but then we all do on occasion. What’s annoying me about it is the sleeplessness at night, tiredness during the day and my memory and concentration are not what they should be. The Ever Lovely Mrs Jones has been noticing the latter and has (politely) voiced her frustration (and then concern) that I seem to be slipping.

Talking of which, we did talk about why, when there’s anything ‘wrong’ (my words) with my behaviour, I blame it on my depression. Well, maybe there’s a reason for that; if I’m falling asleep on the sofa, it’s because I feel very tired. If I can’t remember anything, it’s because my subconscious is (at least I assume) busy doing something else. If I feel little joy in activities, it’s because of you-know-what, the Big D. I do see her point in that being able to pin the blame on a condition rather that me, means technically, I’m off the hook. Ergo: there’s nothing I can do about it – which, by the way, I don’t subscribe to. Yet, if I had a broken arm, would there be the same level of discussion around why I was behaving a certain way? Ah, the fun of an invisible illness! 😛

I am keeping busy with work, reading rather than brooding and walking to keep myself going….. but I think they’re all just delaying tactics. I still don’t know if you can fight this…. blackness… off, or if you just have to sit it out. Anwers on a postcard to the usual address.

It was also said that “I bet it is trans related“. As I said to Mrs J, I don’t feel it is. I just think that things aren’t going right upstairs (as in, in my head) and I’ve just got to keep going, not give in, etc. I didn’t feel it was due to trans stuff and yet, much later, I thought about this. What if it is? I know that pushing to go out more, or be more femme (smooth legs, ears pierced, Sparkle, Invasion, etc) will not be good for our relationship. If I’m honest, much as the previous ideas make the trans part of me sit up and clap its well manicured hands, I don’t think it is the answer…. Or perhaps, more honestly, I hope it is not the only answer, because I don’t think it would work for both of us. As much as I don’t want to feel as I do now, I don’t want to drive my lovely wife away.

Heh. Considering I wrote that I didn’t want to talk about it, I think I’ve rattled on enough about that. 🙂 Still, sometimes it helps to get things out into the open and work it out. On the upside, there are a couple of birthday parties for friends & family and I’ve got some good books to work my way through. I’ve also got a short story I need to finish off. Oh, talking of the latter, I think there was a LGBT author meeting last night, but I didn’t get around to checking it out, nor going along. Maybe one for the future.

Righto. Deep breath. Pull a smile from somewhere (no, not *there*) and man up (oh the irony) until it’s Chameleons next week.