The big party was just what the doctor ordered – and that’s not a reference to the Tory + Libs coalition love in either (Ed: No, you hang up first. No you.). Tsk, and there was me trying to avoid talking about politics! 🙂 Not sure if I can still class myself as a ‘t girl’ when I’m not that far off the big four oh, but who’s counting eh? 🙂 So, the big event! Dare I say it all went very well and it made all the running around & last minute panic worth it. Last week, as you may have already read, I did nip into town to get a few bits and bobs. The outcome of that shopping trip is somewhere on this page as a photo – judge for yourselves. Yes, clothing was eightiestastic and lots of folk had gone to the effort of something suitable and I think that really added to the evening.

Midweek I received an email from Rebbecca who’d had an idea that a more formal note of thanks to the key organisers (Sandy, Tracey and Jayne) would be a good gesture. Rebecca said she’d source some flowers (and what a lovely bouquet they were too), while I – ever the chocolate junkie – bought some choccies.

Ahh, my brain is all over the place at the moment. Events from the night are flashing in and I’m sat typing away with a pleased look on my face. Honestly, after all the work stress, just have a good night out with friends was just what I needed. A meal, cake and a dance just added to the fun! On the way home on Thursday, I was sat in the car flicking the next button on the MP3 player as I was looking for a tune that felt right. All of them seemed old or wrong in some way and in the end, I just turned it off and queued in silence. Today (Friday) couldn’t have been more different: I actually felt positive. Yay. 🙂

Okay… deep breath and start from the top. Outfit packed, Mrs Jones’s tea sorted, kids tucked into bed following cuddles & stories, I made my way up to the Centre. Jayne was already there, so I got the tables & chairs out while she did the cups and plates. It took a little while longer than I expected and on going to the car, I bumped into Sandy and Tracey as they arrived. After a few hellos, they moved on to unpack their car and I headed off upstairs to get changed. Out came the polka dot ra-ra skirt (Ed: rah rah?), pink suede stilettos (a steal at only 3 quid from New Look’s sale rail!), day-glo pink leg warmers and a handful of bracelets / necklaces for that all important 80s look.
I’d spent the last few evenings looking through old photos and a few on-line tutorials over 80s style make-up. While I didn’t go for the slash of uber-pink blusher, the eyes were rather strong (for me at least): pinks, blues and deep plum all swirled together. The 80s may have been the decade that style forgot (Ed: they said that about the 70s too), but it was a lot of fun.

Maddy and Alison turned up as I was still getting ready, so we had a good long talk and a lark about. Everyone seemed in a very buoyant mood and I think that only added to the atmosphere. Alison had a lovely fitted pink cocktail dress and Maddy had gone all out for a fab 80s top – with shoulder pads. As we joked: so wrong, yet so right 🙂

While I am trans and occasionally fabulous, the whole 80s wardrobe threw me a little. Not in an upsetting way, but there I was, stood wearing items that I’d wanted to try as a kid growing up. I was 8/9 when the 80s started, so some of the earlier stuff went over my head. I wasn’t the only one to pick up on this, I think it was Maddy who said her mum had had a similar blouse (to the one she was wearing). So it was all a bit of a time warp really.

Fully glammed up, I headed downstairs to unpack the car – bumping into Sophie along the way. The wee minx had gone for an 80s jacket, cat suit and white boots. If you think that that sounds like it shouldn’t work, you’d be wrong – it was spot on for the evening 🙂 I’d gone back to the car because I’d brought along a lot of old clothes for the Bring & Buy. The Ever Lovely Mrs Jones had also donated (rather well in fact) and the items filled two larges tables in a variety of sizes. The only downside was that I’d misplaced the speakers I thought were at the Centre. No matter, I’d brought some blank CDs along with the laptop, so after a few quick decisions – luckily Maddy had brought some 80s CDs too! – I burned some tracks and put them on the side for later.

In addition to the choccies, I’d managed to buy a large-ish roll of plain material. That was for the group to use as a backdrop to photos. That’s why you can’t see the usual grey and blue walls of the centre in the photo. It was a bit of rush to get that during the week, but really, I wanted to get that because I felt that with all the effort folk might make – which they did – I wanted it to be ready and available. Anyhoo, the Fates smiled and all was good.

We all decided what to order from the Chinese and shortly afterwards, Rebecca turned up. I hadn’t noticed Tracey had popped out to collect the order, but by then it was too late: we’d got the flowers and choccies ready. I silenced the music and asked for everyone’s attention. It was then that stage nerves got the better of me, but luckily, Rebecca took charge and gave a very good heartfelt speech about how Jayne, Sandy and Tracey had helped keep the group going and really help build the numbers. Talking of numbers, my previous expectations of a dozen or so people was way under – it was a packed night and we had 3 or 4 new folk come along. The flowers & chocs went down well with the parties concerned and, being true Brits, there was a touch of humility to the acceptance. Sandy kindly pointed out that it was her and her alone who did the work: Anna-Lou and Tracy (not Tracey), where also a big help. Cue lots of applause and cheering. 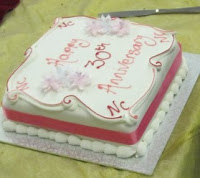 The night rolled on and the food arrived. There was more than enough to go around and it was rather tasty. I didn’t each too much (as I was hoping for another dance later on). The wine and conversation was flowing and everyone – if you pardon the pun – was in good spirits. I didn’t have anything alcofrolic to drink – as I was driving – but that didn’t matter. After the food, there was more talking and, mais oui, we cranked the volume on the stereo.

By now my feet were making themselves known (Ed: not by smell, BTW), so it was on with my trusty dancing shoes. The owners had agreed that we could stay a little longer than usual, so we really did dance the night away. Various classic / cheesy 80s (delete as applicable) tunes followed: Bananarama, Europe, Dead or Alive, Frankie Goes to Hollywood, Tiffany, The Bangles, Men at Work, Kim Wilde to name but a few. I think the only one that threw people was the Pop Will Eat Itself track – but it was in the 80s 🙂 (Ed: Can yoooou dig it?!)

Oddly, some of the music seemed quite hard to dance to, I guess years of the ever increasing pace of pop music means that the older stuff feels rather slow. At least, the non-camp disco stuf anyway. 🙂 Maddy joked that *technically* we could play early Metallica, but I couldn’t help but laugh at the insanity of dancing away to metal tracks while dragged up. As I didn’t have any such tracks to hand, luckily the group were spared that particular pleasure.

My feet are still hurting and my backs a bit tense, I wouldn’t swap any of that at all: it was a truly great night and I hope everyone had as much fun as I did. Just a case of waiting to see what joys email delivers in terms of photographic evidence.